Meal Two: A Fence May Have Two Sides. It Is Still One Fence.

The subject of GMOs came up at a friend’s house over the Fourth of July dinner table. I can’t recall the whole of the conversation, it was brief and fleeting. But I do remember the last exchange:

“… there’s a ton of scientific evidence proving that GMOs are really, really bad…” a friend at the table said.

“Actually, no there isn’t, necessarily,” I commented.

And with that, my friend picked up his plate and stormed off.

Now, I get that emotion. I was there once — not too long ago. And I’d frankly find it much easier to be there now. It is, in fact, infinitely easier to just believe what you want to believe and be done with it. To storm off. To ignore the other side. To be convinced that what you think about food is immutably right and if someone doesn’t agree then, well, who even wants to eat with that person?

But Meal Two taught me a bit about the nature of the fence and its two sides.

Grant and I were lucky enough to go to Chef Camp at Spence Farm. Chef Camp is an intensive two-day immersion in the life and ideas of a sustainable farm in Central Illinois owned by Marty, Kris and Will Travis. Sustainable isn’t actually quite right — beyond sustainable is how they describe it. Or maybe a better way to describe it would be a bucolic Valhalla of a Farm in the eyes of me and Grant. 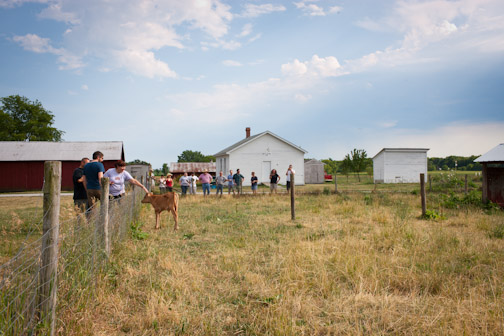 To the Travises, sustainable involves everything from the environment, to the lives of the animals, their lives, the community, financials, marketing — everything. They are striving to live a life they can enjoy and feel proud of, doing work they believe in, growing food they know is healthful in every way and as nutrient-dense as possible.

And they work hard in their community to support, foster and grow the ideas of sustainability they believe in. They foster young farmers who want to get into business selling “properly raised food” to Chicago’s chefs. One 14-year old boy in their “stable” runs a two-acre farm, Windy Knoll Produce, and sells to the likes of Rick Bayless, you should know. These people are doing good works. More than their share. 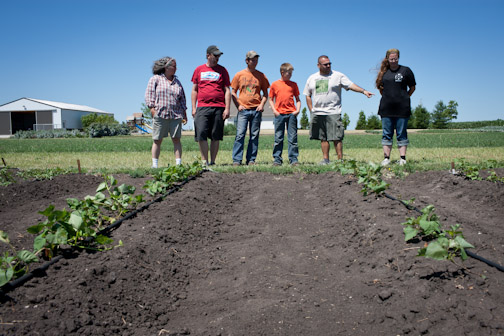 And this is the thing: While there were a lot of great speakers to hear and experiences to share (and delicious meals cooked by fellow campers who were chefs!), my biggest take-away was a talk Kris gave to kick off the weekend. I’ll call it “Fences and the Family Farm.”

This was my take-away:  There is no right way or wrong way to farm — there is the way that each farmer chooses is right for him/her and his/her farm. That’s it. They farm their way. Across the fence, their neighbor farms another. Their goal is to try to work together.

In the world according to Kris, “We may not agree with the way they do things (on the industrial farm next door), but we care about them. They are our neighbors, a part of our community, and we’re all in this together.” 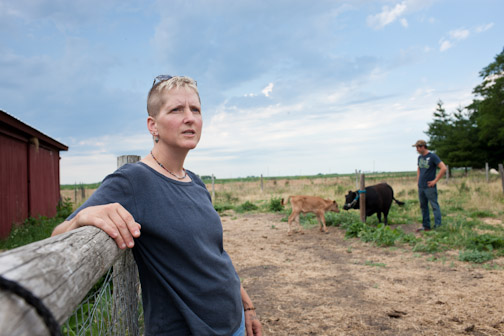 It is some pretty powerful thinking, when you consider that the Travis family are so sustainably pure as farmers that they could be held up as a model for all that could be right in farming in America — they do things like bring back into production Brownie beans from seeds the Kickapoo Indians gave to their own ancestors on the farm long ago and then, after growing the beans, bring a bag of them to the remaining members of the Kickapoo tribe that lives nearby.

I can’t even imagine the soul-fulfilling satisfaction of giving a piece of real heritage back to American Indians. I mean really, you’ve accomplished a lifetime of greatness with that gesture, no?

If you, dear reader, are a sustainably-minded, family farm-focused, localvorey type, The Travises are your holy grail.

And they want you to know that they really don’t judge those who choose another way of farming. I’ll toss in that maybe I shouldn’t either.

Especially when I don’t have all the facts — or worse, if all I have is skewed facts.

Know this: I am still not going to eat GMOs. I will still campaign against pesticides and antibiotics that are baked into the commodity food supply. I am confident I’ll start crying when I end up having to face an animal in confinement.

I am in no way on the fence about this stuff. But I am starting to realize that burning the fence just because I don’t like what is on the other side actually does no good.