Give ’em an inch of either side

– written by Ellen, in response to an email from Grant

At Meal Three (my post is coming, be patient), conventional dairyman Ray Prock shared with us a “mindset” that gets in the way of everyone moving forward: the give ’em an inch theory.

Farmers think of their work as science-based. The things they do — rBGH, GMOs, Round-Up, all the scary stuff — they do it in the name of science. And the belief is that science is good.

So, when you ask someone like Ray why he uses GMOs, he responds with something sane-sounding like, “I believe they can make a better seed than I can grow.” And in a climate that is changing rapidly, bringing, say eye-popping drought to Texas, the idea of farmers choosing a seed that is designed to grow in certain weather conditions can be very intriguing.

After all, the non-GMO seeds were naturalized to grow in their native climate. And, take for instance in my own backyard, I can only surmise that the climate is changing at a rate faster than Mother Nature can respond to. This year, my garden is a hot mess and I, for one, pretty much gave up trying to sort out how to grow in this crazy weather back in May.

So, the reaction Grant and I have when we sit down to a meal like Ray is, “Yea, I get that. I won’t eat it, but I get why you grow it.”

There’s another reality, though, as well and I’ll use tail docking as the for instance.

“There is no science supporting the benefits of tail docking dairy cattle,” Ray said. But farmers still do it. He explained that they do it because if they stop doing it, who knows what else the pro-animal activists will demand.

They can’t give us an inch.

From my side, it’s pretty freaking incomprehensible that the animals that nourish us are “suffering” because of human ridiculosity. 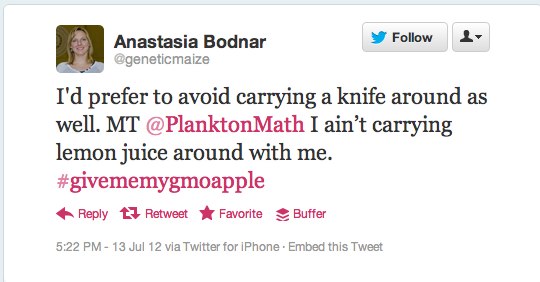 Now, these folks very well might be kidding. The Twitters are good for taking conversations out of context so you can freak the hell out.

But really, I am not sure why anyone would grow an apple that doesn’t brown. Or, for that matter, tomatoes that can be picked while still hard and green so they can taste cardboardy though reddish in the store.

My reaction, when Grant forwarded this tweet, was the same as his, “Scary – people are actually in favor of the most absurd GM thing, an apple that doesn’t brown! What the hell do we need that for!!????? The minute I start to understand them, they lobby for something nutty like this! Crazypants!”

Apparently, in greenlighting all those GMOs, it seems “we’ve” given them an inch and they’re taking a mile, thank you very much. And that makes me really sad and frustrated and my gut reaction is to stop all GMOs because I think “they” just don’t know when to stop.

So, I am officially letting all you conventional farmers know: if you are pushing for science-based farming because you are actually trying to do good by, say, growing a variety of sweet corn destined for human consumption that can withstand drought, you’ll probably find me not just understanding your decision, but actually supporting it as well.

But if you’re creeping into areas that are just plain old greedy, like a damn apple that doesn’t brown, my natural reaction is to recoil in horror and decide that you — and all your sciencey hocus pocus — is scarysauce.

Really, ALL OF IT.

And because of the tail docking example, I know you understand where I am coming from. I know you know in your heart that the single “bad apple” idea is what spoils the whole batch.

I wanna know what you are now going to do about it.